​It must be Wednesday meaning a new scribble here from me to you.


Something I don't plan to do all that often here are product reviews but I thought "What the Hell! This item is worthy of one to me."

Now before anyone accuses me of selling out by taking corporate handouts to write reviews such as this one you're reading right now rest assured I purchased this product with my own money and no one person or entity held a gun to my head saying "Jr., you will write a review on this or you're going to be swimming with the fishes." Now having cleared that caveat out of the way……

Every so often something comes along that either works so good that I have to tell anyone and everyone about it or it works so bad I have to tell anyone and everyone about it……..Well folks the former applies here in this case. If you have ever ran a carburetor, or carburetors, and had to deal with an slight hesitation from off-idle and all the adjustment and tinkering gets it as good as it can get…keep reading because one of this world's biggest skeptics of these kind of gadgets, namely Me, is now eating some crow…and much better off because of it!

The Powerblast Plate from Thompson Performance LLC is that gadget; A patented invention of Rick Thompson who, along with family members Dan and Jaime Thompson, formed the company after inventing and producing this device for retail consumption. By design they atomize the raw fuel that goes into the venturis of the carburetor that comes directly from the stock nozzles. Having built various engines over a 30 year career of running a speed shop in California's "Silicon Valley" Rick toyed with various creations and the like before he hit pay dirt with these little nuggets of gold…but make from high quality brass.

Their website has several YouTube videos showing properly tuned carburetors of both Holley and Edelbrock (Carter AFB) types and their stock set ups. The videos show the before and after effects on raw fuel delivery into the carb before and after the Powerplate is installed. The videos alone show the difference in fuel atomization as well as how much unburned fuel lingers around on the splash plates and "butterflies" above and below the venturis and how the Powerplate corrects that problem.

I run Edelbrock 750's on both the '79 Malibu and on the '66 Impala SS and both have had the slightest of hesitation from off-idle for as long as I can remember. In spite of all the tricks, parts changes and adjustments it was just the nature of the beast….and AFB/Eddy's have always had a less-than-stellar idle circuit to begin with. This simple item vastly improves the fuel flow and the throttle response in both off-idle and driving situations.

In this case it a simple procedure of pulling the top of the carb off to expose the fuel nozzle, remove the two screws that hold the nozzle to the carb, place the Powerplate over the stock nozzles without removing them and using the stock mounting holes reinstall the two screws that hold the nozzle in place and your new Powerplate and reverse the disassembly procedure…that's it! 20 minutes maybe unless the mercury outside is hovering around freezing as was the case on this day.

​I put one on the 'Bu first and, in spite of the aforementioned mercury and running no choke, It started much easier than in the past on such a cold day. After warming the engine to normal operation temperature (180°F) I took it out of my neighborhood to my local "Chuck Yeager" test site and did some mid-throttle pulls and off-the-line starts. While it was no fire breathing top-fueler destined for the "Alcohol 5" the rapid response in both mid-throttle and off-idle was a significant improvement and vastly impressive given the simplicity of the whole operation.


One of these doo-dads for the Eddy set me back about two Andy Jacksons plus shipping and Thompson has applications for most series of Holley and Edelbrock's as well as some in the works for various other two and four barrel carbs. There are installation videos on their website as well as detailed instructions with illustrations available as well in a downloadable pdf format. If you are really stumped, have questions, need technical info or just want to brag about boiling the hides off of those T/A Radials in front of a hottie at the local burger and brew joint their phone number is listed on their website at www.thompsonperformance.com. They also have pages on Facebook and Twitter as well.

That's it for now.
Keep it real and keep the rubber side down.
Cheers. 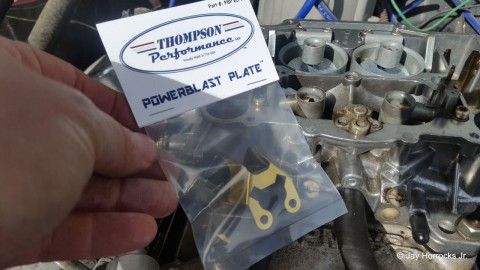 ​The Powerblast Plate from Thompson Performance is a simple item that installs easily. This is the application for an Edelbrock 750 CFM carburetor. There are applications for Holley as well. 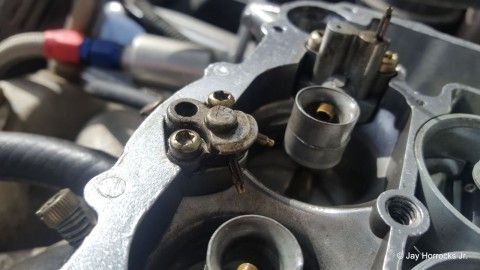 ​The stock primary fuel nozzle on the Eddy 750 on my '79 Malibu. Fuel is directed over the entire area with unburned fuel that doesn't make it to the venturis and splashes over the butterfly openings of the carb. 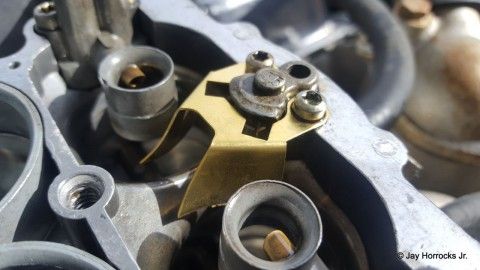 ​The Powerplate installs over the nozzle using the same two mounting screws holding the nozzle. Nothing is removed or altered. This directs all the fuel straight into the carburetor atomizing all fuel applied eliminating hesitation and improving off-idle and mid-throttle response.

Did you remove the carb as instructions say, or install with carb on manifold still?

I did it on the car. On both cars. Since I wrote this article I put the same Power Plus played on my 66 Impala and improved both cars immensely!

It looks as though this deflector will reduce the airflow of your 750 cfm carb down to 650 cfm. Perhaps running a smaller carb and tuning it would have been the best solution.

Dangerous
This comment was minimized by the moderator on the site

Dangerous
There are no comments posted here yet