Tales of the Rat Fink! Celebrating the Life of an Icon Named Big Daddy Inside the Rat Fink Museum in Manti, Utah.

​Beginning In Southern California in the late 1950's, Maywood, California to be specific, there was a man by the name of Ed Roth who built several of his automotive creations in his shop. He was also a painter, pinstriper and talented artist who designed several off beat cartoon characters during this same period. One in particular became an icon and his best known creation, a product of the 1960's automotive counterculture he dubbed "Rat Fink," which today is as synonymous with car culture as the man is himself. I say "is" because even though he left this mortal plain in 2001 he and his creations are as popular as ever.


They live on thanks to the efforts of his widow Ilene (aka Trixie Roth) and the myriad of talented artists who have carried on the Roth tradition and those who have curated some of the vehicles Roth himself built and fabricated that every so often make it to one of the official reunions.

The Rat Fink Reunion in Manti, Utah began shortly after Roth's untimely passing and has grown and thrived every year since. Held annually the first weekend in June the reunion brings many artists, creators and car nuts to the southern end of the Sanpete Valley to soak up the artistic muse of Roth's past creations as well as soak up the new creations of artists and the like who were inspired by his style of art and kustom kar Kulture.

How did Roth end up leaving Southern California as a beatnik, who even had a surf band he himself fronted at his creative zenith called "Gasser and the Weirdos" go from the counterculture to the more conservative and small town pace of Manti, Utah are less documented and personal. But even with the lifestyle and his beliefs that had changed from those days the Ed Roth that everyone knew and loved didn't. He created and lived out the last years of his life in small town anonymity. Today his grave in the Manti Cemetery is clearly marked with a headstone that could only be for hot rodding's "Big Daddy." That is what is celebrated there that weekend every June.

This year's Rat Fink Reunion was the 16th Annual event. From the humble beginnings at the Roth home featuring artists and a few close family members, friends and associates of Roth's the event, and the facilities at the Roth compound have grown substantially. Now a three day event The Rat Fink Reunion hosts a 5K Fun Run, Parade and a car show in Manti City Park showcasing many different vehicles that have traveled far and wide to be a part.

I missed the event last year and nearly missed it again this year. Thankfully the planets aligned and I was able to take in the sights of everything The Reunion had to offer. Many "officlal" Rat Fink artists were on hand showing off and creating their wares as well as crafting and pinstriping others as they are licensed to create Rat Fink artwork by Roth's estate. Many car owners and spectators brought their own items to them to have personalized, painted and created to their delight whether it was Rat Fink related or not.

One thing that sets this show apart is that each one of these artists creates their own personal award and award pick at the Saturday car show based on their own artistic license. These artists then pick a vehicle that best personifies that vision. That vehicle could be a concourse correct vehicle or a highly customized custom. It also could be a rust and primer rat rod, a muscle car or a street machine that has seen a few miles with a paint job that needs to be redone.It doesn't matter really and the car owners and spectators enjoyed it all.

I finally concluded my day with a visit to the Roth Museum. What started as the family home, which took on the appearance of a museum in those early days not long after Roth's passing, now has several thousand square feet devoted to Roth's creations and gift shop with t-shirts, posters and other Roth regalia. Many artists too were still on hand under the covered walkway finishing various projects and talking with various spectators who were making their way to the gift shop and the museum.

See you out and out and keep the rubber side down.
Cheers.

​The Rat Fink Reunion brings vehicles and people from all across the US for this event. This custom from Michigan is owned by a long time friend of the Roth family and makes the trek west annually. 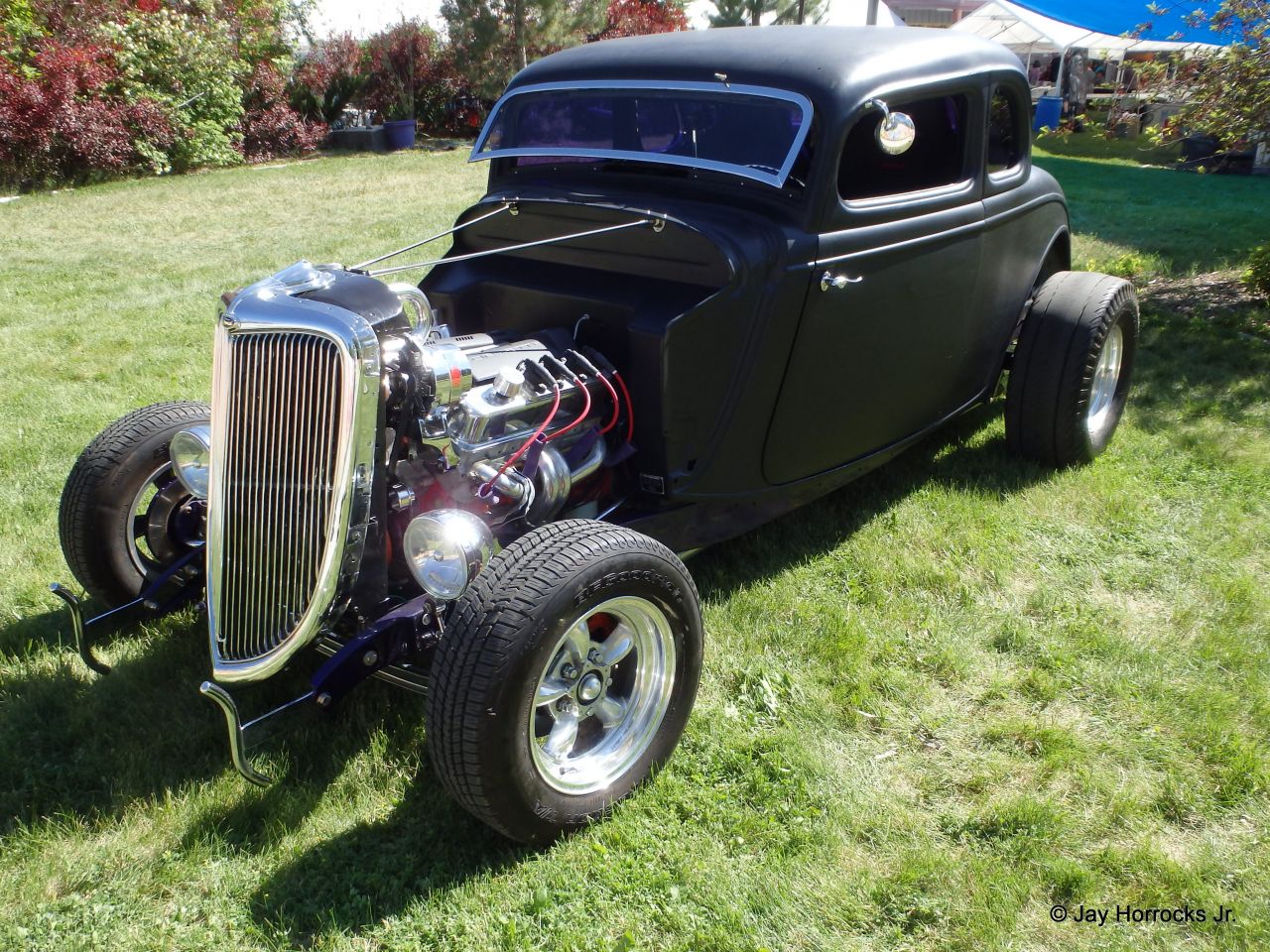 ​One of a few rides at the Roth Museum on that Saturday. A chopped five window Ford coupe that screams "Hell on wheels." Right down to the cheater slicks it sports. 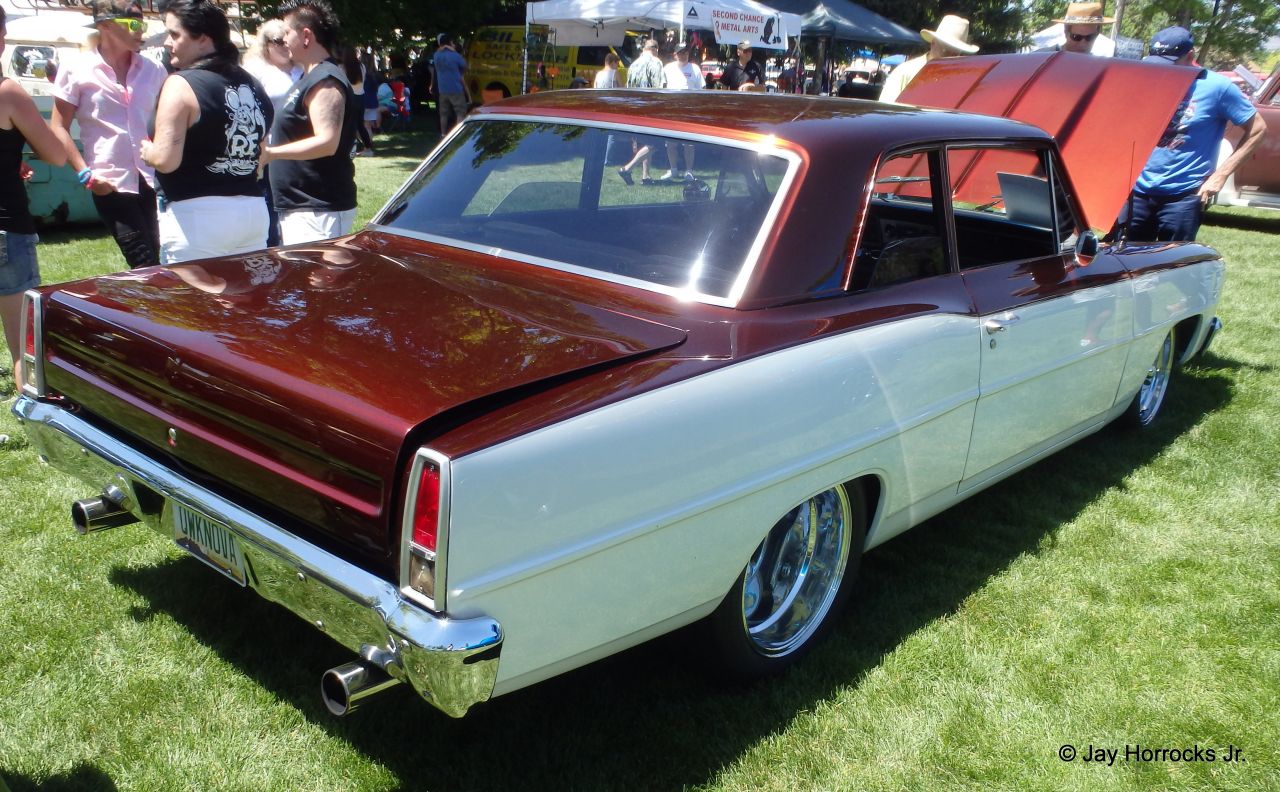 ​One of the cleanest rides of the weekend make the trip from Tucson, AZ. This 66 Chevy II two-door post is definitely one-of-a-kind.