Looking towards the western horizon standing 3/4 track on the drag strip at Rocky Mountain Raceway. October, 2018.

​If one heads west on Utah 201 just before the freeway becomes a divided highway sits to the south Rocky Mountain Raceway. For over two decades this monolith of Utah racing activity hosted a variety of oval, drag and motorcross events over its run. If you factor in Bonneville Raceway, RMR's predecessor which began operations on the same ground in 1968, you have a half century of racing that was conducted there.


History has been told and untold before of the who's, the what's and the whys over that time. The biggest names in racing, both local and on the national stage, had been featured there at one time of another. Ground Zero for Utah motor sports in the Salt Lake City suburb of West Valley is all quiet now. The roaring of engines, the plumes of tire smoke and the cheers from the crowds will be heard no more.

On a Sunday in the late Fall I rolled out west one last time to see RMR before the site is razed into history; soon to become another industrial park on the Salt Lake Valley's west side. Arriving at the front gate and pulling into the lot the place looked like it normally did at the end of each race season save for some missing bleachers and other pieces. But this time it was more akin to an eerie calm. That feeling you get when you visit a friend who is terminal and you know it may be the last time you see them.

With gates open and fence posts and chain-link taken down I cautiously entered the staging area of the drag strip. Almost like a small child who's not sure if he or she should be there or not I walked towards the water box and the site of the former "tree." I stood there in silence with the only noise coming from the cars on 201 and the occasional clinking of metal piping for a lone contractor or two taking things down from inside the former pit area.

I hopped back into my pickup after walking around the ticket booth and the offices and drove down the parking lot that follows the drag strip. Noticing the fencing torn down I hopped out of the truck and headed for the timing signage at the east end of the track; both towering into the sky and standing proudly as they have done for decades prior. I then hopped the "k" rail and stood on the track almost in a transcendental state as I imagined the crowds and the sounds of horsepower enveloping my psyche at that particular moment in time.

In a moment that only those that are sensory or what not may understand I actually laid myself down upon the track's surface. The deep connection I felt at that moment was all encompassing and enveloping. As though I was channeling something bigger than everything that had happened before the September 30th ending that the public saw there. The only time I had this kind of connection was traveling along Route 66 in Arizona some fifteen years earlier. But not like this. This was deeper, more real, touching base with my past and the memories of youth. Time spent absorbing all it had to offer.

I know some of this may come across as a bit foreign to some. However in the light of change, the closing of a door, a window of perception into something many of us grew up with the fact that an institution that was a big part of many of our lives was ceasing to exist; to be no more. Today is now only to be banished into the conscious memory of those who we a part of it. Worst part was, for me personally, was I was not able to be a part of things the last couple of years before the end became today's reality.

At sunset I packed myself into my pickup and drove off towards home knowing the place I just visited would never be the same again. The curtains are drawn, the lights are low. Never again will the sounds of horsepower and the cheers of spectators be heard again from this hallowed ground. If the Earth below us could tell a tale the Earth that will lie below the warehousing project that will stand in RMR's place in the not-too-distant future would be of telling of man and machine's conquest of physics, inertia and how speed dictated a lifestyle and a way of life for many a human in the 20th and early 21st Century.

Racing will resume in SLC in the future. Until then Rocky Mountain Raceway will join Bonneville Raceway, Wendover Raceway, Copper Raceway Park, Grand Valley Drag Strip, Pleasant Grove Drag Strip and several other venues across Utah's horsepower history that have bid adieu to the sport like the sands of time and Mother Earth reclaiming what is rightfully hers. All we are in the end is dust in the wind.

Keep on keeping on and keep the rubber side down.
Cheers. 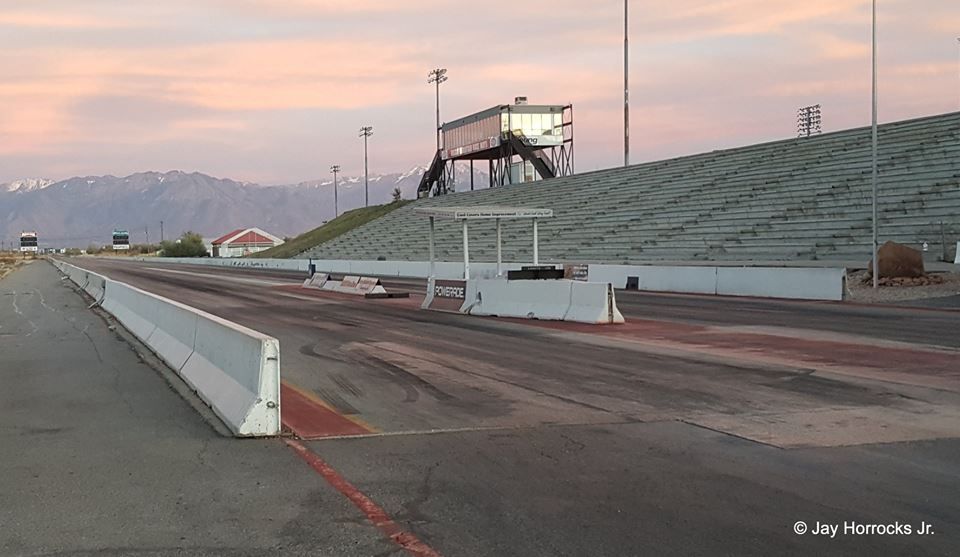 ​Looking East from the staging lanes towards the horizon. Aside from the sounds of some equipment and cars passing on 201 there is nothing but silence here now. 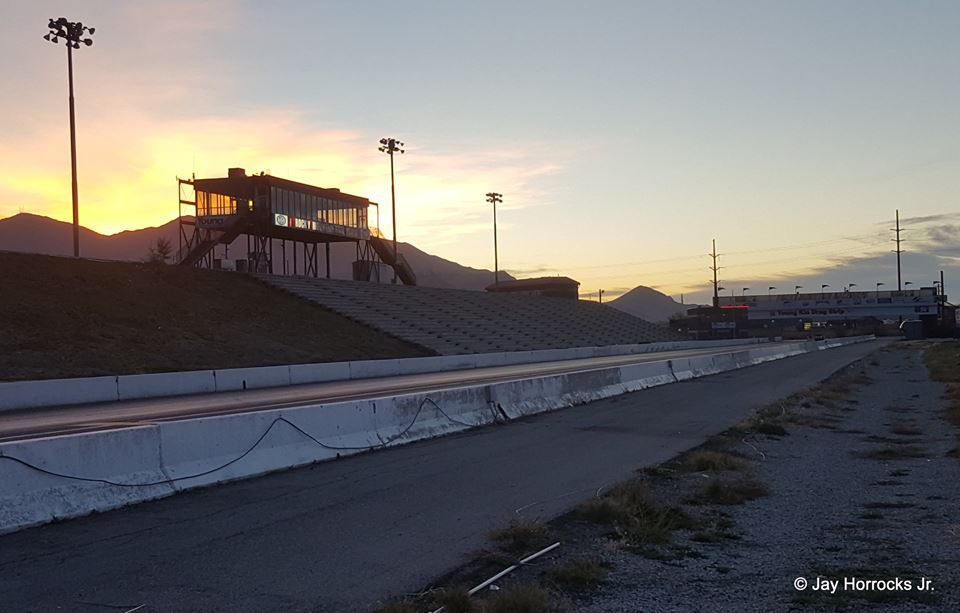 ​Sun sets over the drag strip on a calm October evening. Fencing that prohibited a shot like this, along with the metal bleachers, is gone. 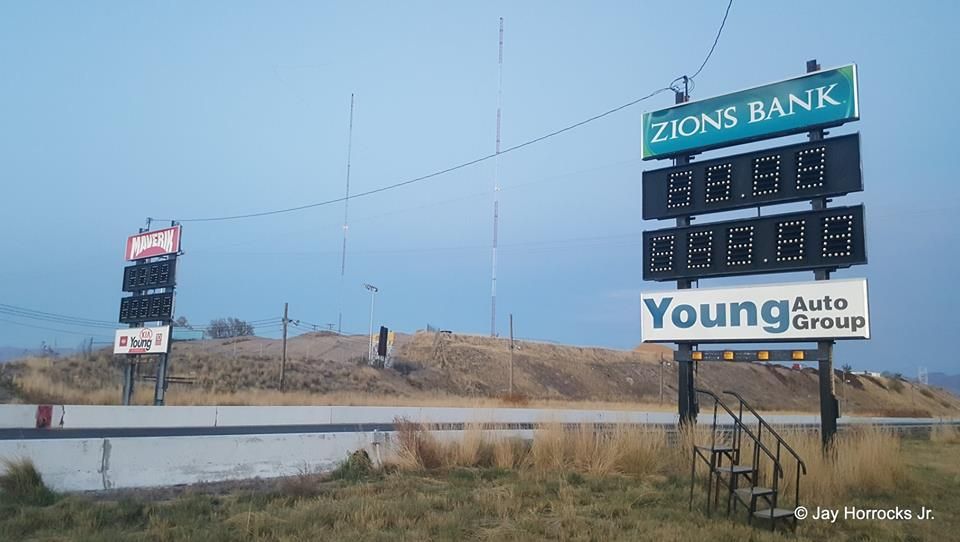 ​1320 feet down the way the signs displaying ET's and MPH stand silently among the weeds and radio towers. Twin monuments of an era that gave enjoyment for so many. We will miss you my friend.

I'm going to miss RMR. I've spent many a late summer night at Bonneville and then later RMR over the last 30 plus years. Many great friendships and memories have been made over the decades. I am fortunate enough to be great friends with a group of people that have been around the Utah racing scene since pretty much the beginning and love hearing the stories of yesteryear. We start out as competitors and before you know it we're family, not by blood but because of our common love of racing. Until we have another local venue, we'll just have to drive a little further to Vegas, Boise, Denver to go racing and continue making those memories.

1 Cancel Reply
I'm going to miss RMR. I've spent many a late summer night at Bonneville and then later RMR over the last 30 plus years. Many great friendships and memories have been made over the decades. I am fortunate enough to be great friends with a group of people that have been around the Utah racing scene since pretty much the beginning and love hearing the stories of yesteryear. We start out as competitors and before you know it we're family, not by blood but because of our common love of racing. Until we have another local venue, we'll just have to drive a little further to Vegas, Boise, Denver to go racing and continue making those memories.
Cancel Update Comment