Moab, Garden of Red Rock Splendor and the Materials of a Time Passed Renewed. ​Bravery, a leap of faith, going for the gold…….


Many different types of verbiage could punctuate braving the elements just to attend an event this spring. Nature's Madre teased one and all last month with a week and change of seventy-plus degree weather and the last several weeks or so we have paid for it. However there have been little snippets of light in the clouded and wet darkness where man and machine have been able to make it to an event without things becoming a total wash-out or freeze-out.

After some well needed TLC the '66 and I were raring to go. So after some careful consideration, some lodging strategies and the daily grind of life and the hope of letting the planets and all fall into the correct orbit, I decided that a return to Moab was in order.

I attended my first Moab rod run in 1996. The Moab Rod Benders were only about three or four years in as hosting the whole thing at the time but circumstances surrounding that first trip precipitated the several return trips back over the next two decades, whether I brought a car to enter or not. Just touching base with folks I have met over the years from Moab and neighboring Grand Junction, Colorado a couple hours away, made it a great way to kick off the show season each year. When one of the original club members takes your broken, side-saddle alternator bracket down to his work, the Moab city shops, welds it up well enough for a three hour drive home and when asked about making his time and energy right with payment just says "brings a few more friends with cars and come back next year," I certainly paid that gentleman back in spades.

Fast forward to today as the Moab Rotary runs the gig now and this year's show was their 25th annual affair. Although the Rotary has had their hands involved for only a few years of that time they have brought back elements of the shows early days that disappeared for several years between the time the Rod Benders started the show and the Rotary took it over.

Moab is one of the only shows left where participants, and folks that drove their rides three hours and change south and were not in the show for reasons that are not relevant, all allowed to lap Main Street. Just like in my old Provo Center Street, Spanish Fork and American Fork days. Along with all this there are rod runs on Friday and the following Sunday after the awards as well as a cruise night hosted by the local Carquest auto parts store.

Last year was the first year I missed the Moab spectacle in twenty years and only a few short weeks ago I decided to make an effort for a return. Something so simple is an exercise in patience and determination, as being on a strict budget, a motel room in the serious three-digit stratosphere was out of the question for reasons of logic and of finance. Through luck, perseverance and the power of the pet rock I made it happen and made it back to Moab 2017!

Vehicles from neighboring Colorado, New Mexico and Arizona mixed in along with the in-state rides, and even some from as far away as Texas and Ohio, dot Moab's old city park, or Swanny Park as its known, that Saturday. Even though the car count appeared a bit down from years past due to the open spaces near the far edges of the park you would never know it from the spectator count. Taking photos is a challenge in that environment but it was doable.

In spite of the chilly weather the folks that braved it, both at the show and along Main Street both Friday and Saturday night decked out in jackets with their lawn chairs, were rewarded with the sound, sights and smells of horsepower and the visual of some awesome rides. An enjoyable evening and weekend as well as a great start to my car show and road trip odyssey I have planned out for the year.

The previous weekend, in preparation for this adventure, I stopped in to check out the car show at Timpanogos Harley-Davidson in Lindon, Utah that Saturday. In its second year the folks there host a car and bike show with an equal amount of cars as there is bikes. One of the few shows I know of where you have a significant amount of bike owners amongst the car guys and everyone admiring each other's creations and possessions.

The dealership makes for an awesome venue for the event and is a story in itself. Built on the site of an old truck stop that burned down at the beginning of the twenty-first century the dealership that stands on the site today was manufactured out of remnants of the old Geneva Steel Mill that ceased operations around the same time. Today it serves the biker community and the community at large with a grill that makes killer sliders as part of the whole thing.

Around one hundred cars showed up and were rewarded with a very nice day of sun and mild weather. Not to mention the beautiful cars and bikes that was on display. Between the backdrop of the building and all of that it makes for a nice venue and I hope to see it continue in the future….and I have a feeling that it will.

Well, that's a wrap for this time.
See you out and about and keep the rubber side down.
Cheers!

​It's not everyday you see a '61 Impala SS. The first year of the Super Sport package Chevrolet made and this sweet ride from Texas turned more than a couple heads at this years show. 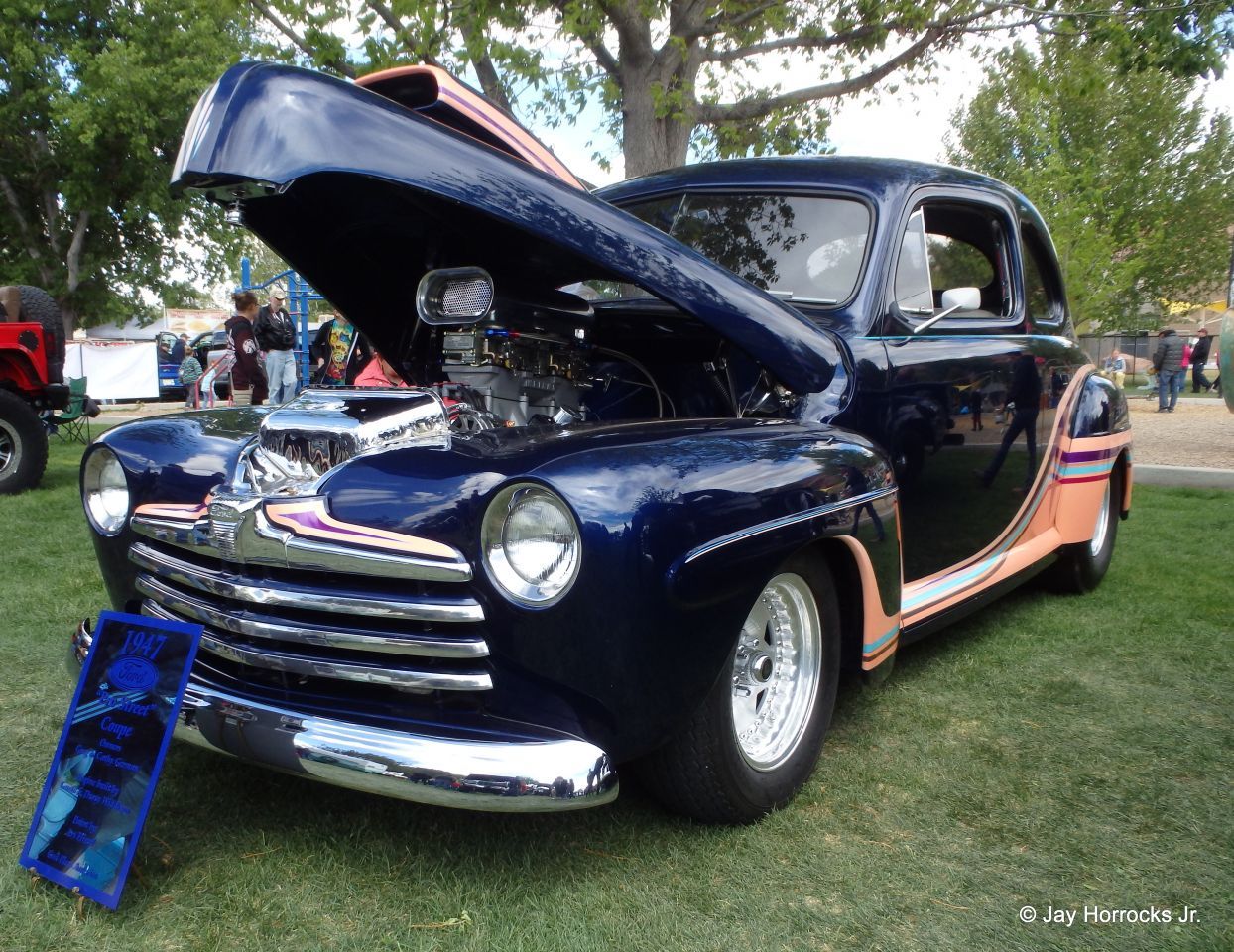 A pro-street 1947 Ford is also very uncommon. Lots of attention to detail encompasses this machine and was a head turner itself on that Saturday.. 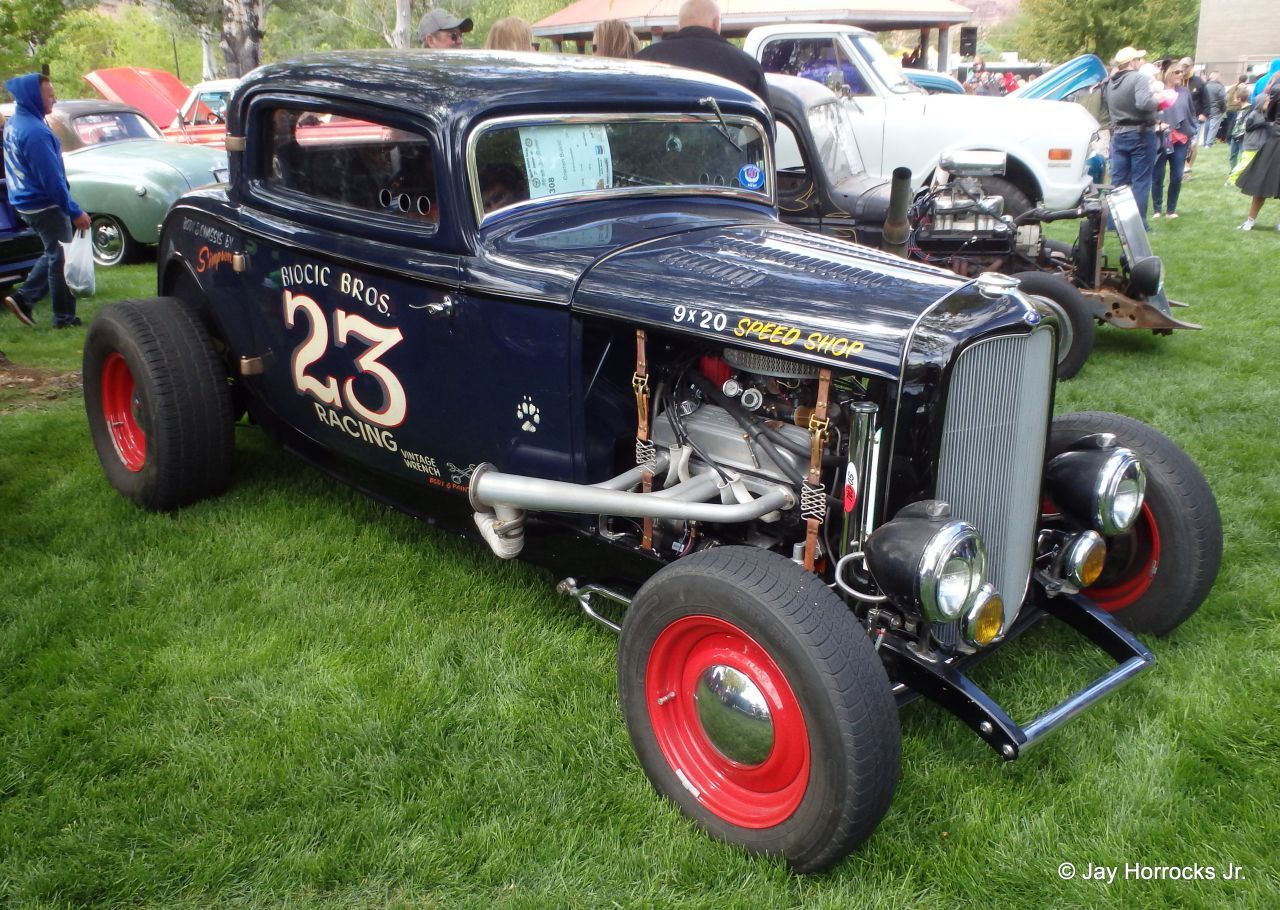 ​Traditional rods were in abundance this year in Moab as well. This 32 Ford three-window coupe is straight out of the old school of rodding lore. A sweet ride out of neighboring Colorado.

© All texts and photos © 2017 Jay Horrocks Jr. unless otherwise noted.

How do you feel about this post?
Happy (0)
Love (0)
Surprised (0)
Sad (0)
Angry (0)
“Is That Automatic or Manual Transmission”
Stories from the Road: The Pigskin Gamble for Disc...