​The news that came out on social media last week regarding the Cache Valley Cruise-In's popular Main Street Cruise Parade in Logan, Utah is disheartening and sadly a product of our modern times. For those left unaware the Cache Valley Cruising Association, the host club who organizes the three day automotive event, will be hit with a $10,000 bill from Logan City if it chooses to continue the closing event after this year. An added expense that the CVCA says they cannot absorb.


Putting on an event such as the Cruise-In is no small feat. As someone who has attended nearly every Cruise-In since 1989 and brought a car, the same car back year after year, since 1992 the Cruise Parade was a big part of what brought both man and machine to Cache Valley in the first place. It too brought many others up as well who have made the Cache Valley their place to spend the Fourth of July weekend bringing in considerable amounts of money for hotel rooms, food and fuel. All of that after this year is in jeopardy.

I'm not going to say that the loss of the Cruise Parade will kill the entire event but it will have a dramatic effect in the short, and possibly, long term. Before the parade was added to the then two day event the Cache Valley Fairgrounds saw about 350 vehicles over that weekend. Pretty much what shows at several other automotive events along the Wasatch Front throughout the summer. If this goes away because of bureaucracy and short sightedness on the part of Logan City government, what makes this show unique will make it just like any other show that held from spring to fall every year.

There are more car shows in Utah than ever before. More choices and more sponsors who are making these other shows happen. It's a blessing and a curse in some aspects. A blessing that there is so much interest, a curse because the times that spawn it are undergoing change.

Looking back on the cruise with fond memories as someone who was in his early 20's when I made it up…and stayed on Main Street long after the official cruise had ended. Back then it was madness, a fun madness. But the times that created it are no more. All the more puzzling as to why Logan City wants to shoot the gift horse. The rowdies of past Main Street lore are no more, and haven't been in many years. Because of the all the extra law enforcement hasn't been needed after the event for quite sometime. Sunday morning the CVCA members help clean up Main Street as well. Giving back for the use of our public streets for this purpose and sometimes finding a discarded winning ticket for the annual giveaway car unclaimed as a souvenir.

Kids today didn't ever go cruise the main drag in their hometown growing up like our generation and past generations did. The Cruise Parade pays homage to that albeit in a controlled environment. It also give those of us who were able to a chance for an hour and half or two a chance to step back in time and relive an important part of our youth. If it disappears it will be a big loss for street rodders everywhere and will surely drop car count at the Cruise-In as well as the revenue that comes with it.

There are petitions and what not circulating on social media. Writing and phoning those in Logan City government may help. Hopefully the big picture will overrule this short sight and this budget impasse will be remedied by the city of Logan and CVCA over the expense bring a future to this portion of the event. Because no one wins if it goes away.

That's all I'm saying for now.
Keep the rubber side down.
Cheers. 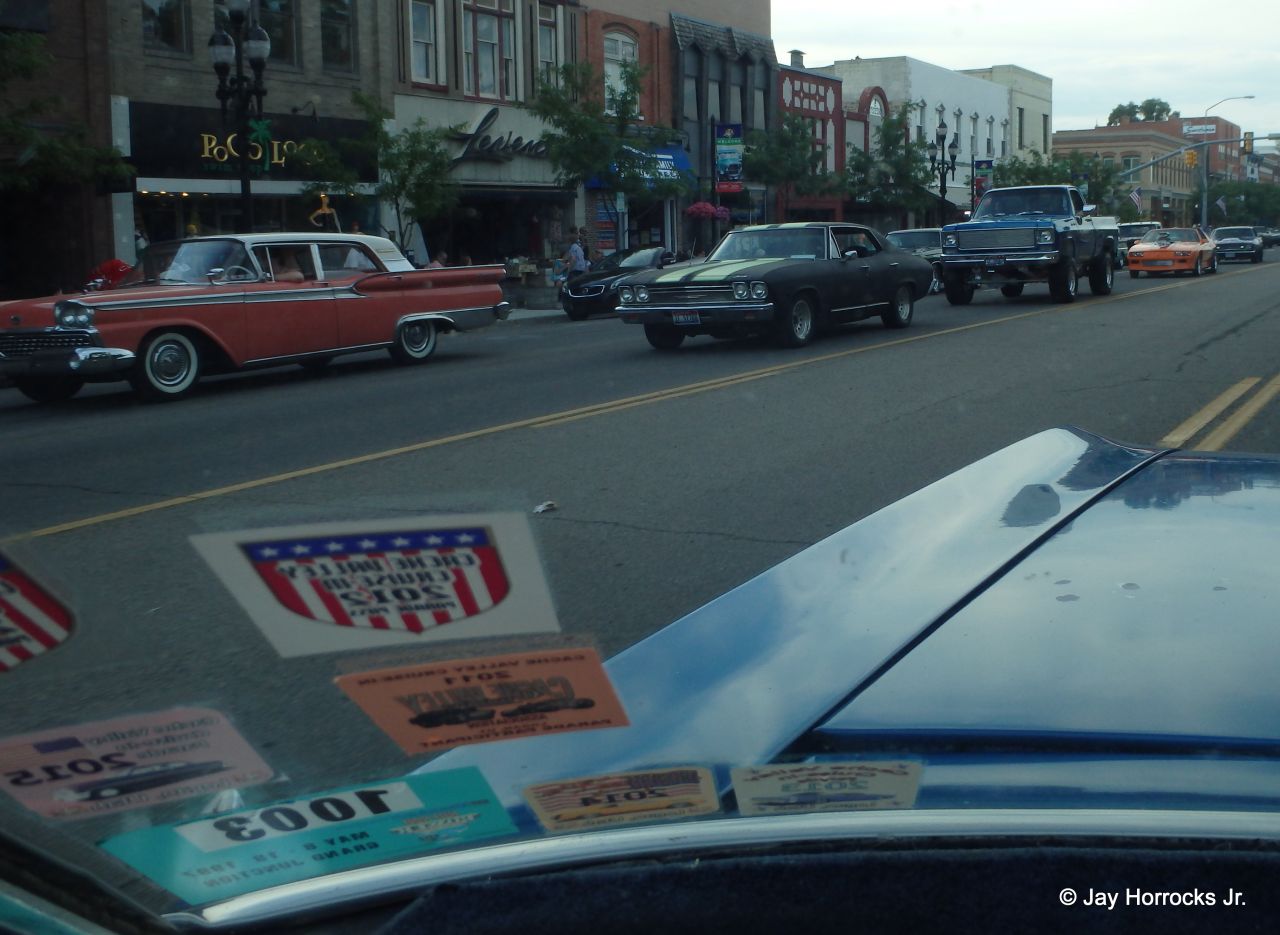 A birds eye view from Center and Main in Logan, UT during the Main Street Cruise Parade. The decals on the windshield are a rite of passage...and after a few years a howdy from the UHP for "improper lookout." Silly Me. 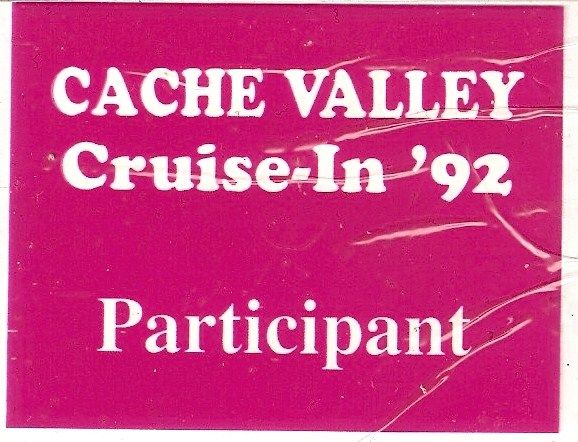 Where it all began for me and the '66 at the Cache Valley Cruise-In with both man and machine. Haven't missed one yet since. Will the streak end???? 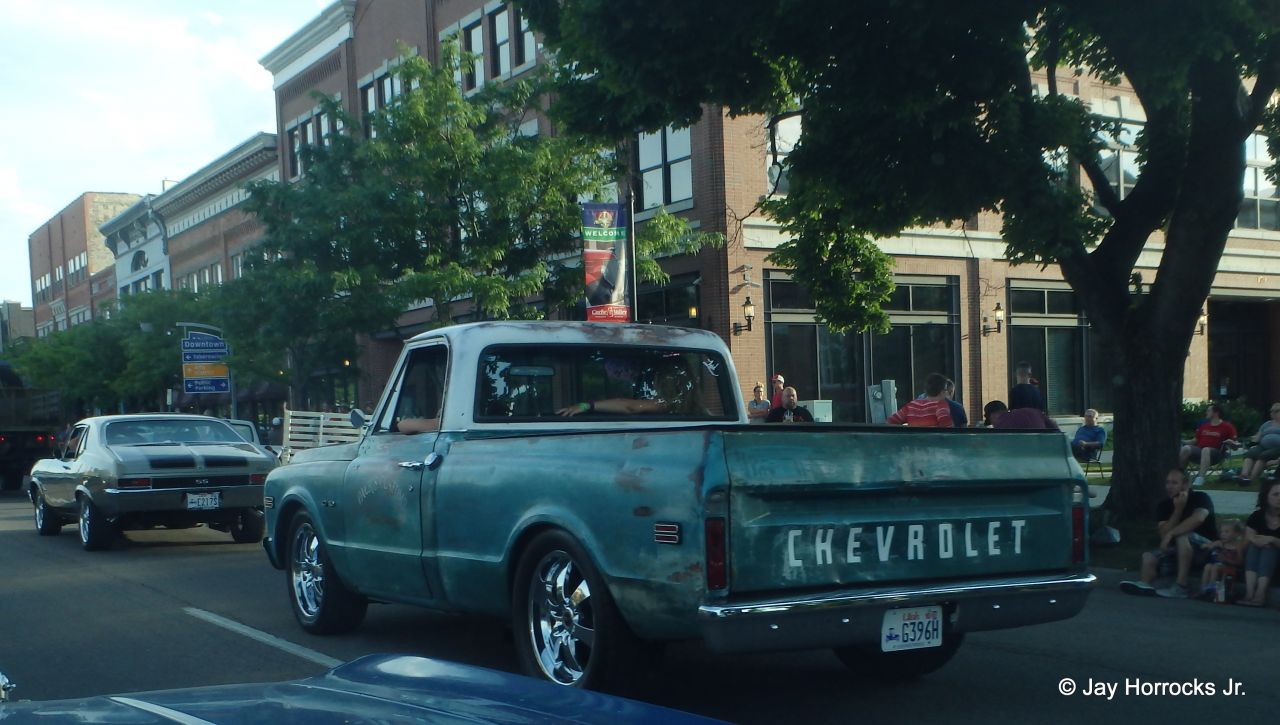 Families are a big part and the Pack family of the Salt Lake City area attend every year with multiple vehicles. Like many others folks they bring in revenue to the city and enjoying driving their vehicles for the crowd to enjoy and appreciate.
Tweet
How do you feel about this post?
Happy (1)
Love (0)
Surprised (0)
Sad (1)
Angry (0)
Forty Years of Street News….Mountain West Street N...
SEMA Seeks Young Entrepreneurs With Innovative Aut...

You and I have been attending the cruise-in for about the same amount of time, over 30 years! Over 3 decades of fun, friends and memory making. We (Hot Rod Time and personally) have long supported the Cruise-In, some...

There is no denying that the cruise-in is a major draw of visitors to the city during the 4th of July week/weekend. Most years the show draws in around 1000 +/- cars, and we all know that us car owners spend money, and lots of it when we visit a multi-day out of town show. There have been more than one time that there are no hotel rooms available in the city. Long lines in every restaurant, gas station, shops on main street, and so on.

On a personal note, I find it peculiar that with a staggering budget of $146,000,000 for 2019, that the city cannot find $10k in there somewhere. I would wager a bet that the sales tax revenue alone for that weekend far surpasses any extra expenditures that are incurred.

We will always support the club and show in one way or another, as we have made so many memories, so many friends at this staple of summer shows. I sincerely hope that the city and car club can find a solution to keep the after show parade going on.


Read More
SteveFern
There are no comments posted here yet