And now, for something completely different

What do you do when you have a killer flamed pearl purple ’46 Ford coupe with a blown, fuel-injected 351 Cleveland V-8 sticking up through the hood parked in your garage?

Well, in Gary Nooney’s case, you look for something a little smaller, a little lighter and a whole lot less fuel-thirsty to drive on a regular basis. That’s why he bought the body and frame of a 1936 Ford pickup from a friend for his next street rod project five years ago. 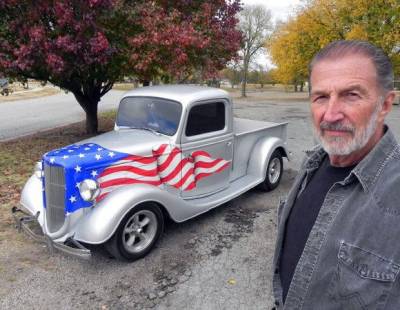 "I was really looking for a ’46 Ford pickup because I’ve got the ’46 coupe," he said. "But I bought this pile of junk instead. It was just a cab sitting on a frame, but I looked it over and brought it home anyway."

He knew he had his work cut out from the start. His friend hadn’t misled him about the condition of the truck, he said. He thought a little welding would bring the chassis into shape, but once he had sandblasted the frame, he realized most of it couldn’t be saved.

"You could have shot a Red Ryder BB gun through that frame at any point from the front crossmember back," Nooney said. Fortunately, for someone with his expertise and experience, that was not a project-ender.

After installing a coil-over front suspension, he said, "I built a new frame from 1/8th-inch steel plate from the coil towers to the rear." Simple, eh?

"I started working on this junk when I was a kid," Nooney said. He grew up working in a Standard gas station run by his father and was never far from machinery while serving in the Marines during the Korean War, coming home to work at Beechcraft and then as a Ford mechanic for more than three decades.

"All I’ve ever done is beat on this stuff," he grinned.

He built a lot of engines, transmissions and rear ends during those years, so he wasn’t intimidated by what lay ahead. The roof of the old truck was in remarkably good shape, but the fenders were another matter. It took four battered, poorly patched front fenders to make two good ones. The rears were even worse, where no fewer than seven holey fenders were required to turn out a pristine pair.