Ford Motor Company recently unveiled its all-new 7.3L (445 cubic inch) gasoline V8, with a single, in-block camshaft and pushrods to activate the valves. This is a big deal because since 1996, all Ford gasoline V8 engines have been relatively small in displacement of the overhead-cam design (The last Ford high-performance pushrod V8 was a 351 Windsor found in the 1995 SVT Cobra R).

While not necessarily a “hot rod” engine slated for the iconic Mustangs, Ford will use the big-inch small-block in its trucks, namely the F-250, F-350, F-450, and in various commercial and fleet applications including motor homes and delivery trucks. So why are we interested in a production-level truck engine? Because all great engines find their way into great cars (even if they are swapped in after the fact), and this V8 has the potential for greatness. 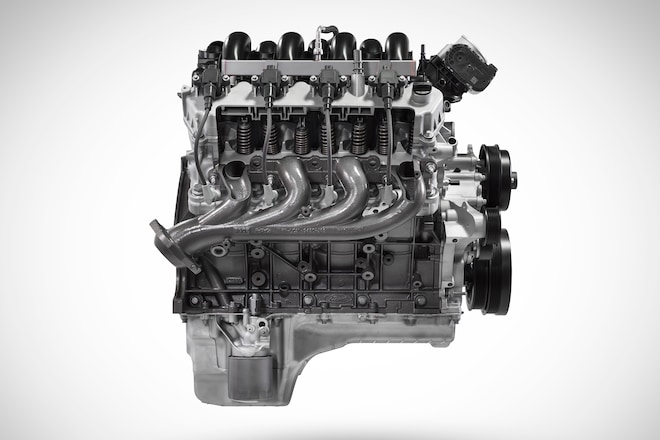 To learn more, we spoke to Blaine Ramey, supervisor of large gas and diesel engine performance development at Ford Motor Company. Ramey is also a hardcore drag racer, who pilots a modern Cobra Jet Mustang. In fact, your humble scribe faced off against Ramey in the final round of the 2011 Ford Performance Cobra Jet Showdown.

The new 7.3L V8 has pushrods, sizeable cubic inch, a robust block and rotating assembly, high-flowing heads, and variable camshaft timing. In other words, along with being a truck engine, it has the DNA of a really great street or race engine. It was also rumored that this was the brainchild of former director of Ford Performance, Brian Wolfe. (Note: Wolfe is now retired from Ford, but continues to drag race his Ford Mustang).

“When the project kicked off, [Brian Wolfe] was the director of global engine engineering. We decided to go with a brand new design; one that made the most sense,” said Ramey. “We essentially had a clean sheet of paper, and this design offered the customer what we’re looking for in that segment. Basically, it fits the heavy-duty market for trucks and we wanted to have a common engine that would go across the board. This will be in dump trucks, motor homes, and pick-up trucks. We needed a relatively compact package with low cost and high reliability. It made sense to do a pushrod V8 for cost to the customer and maintenance. 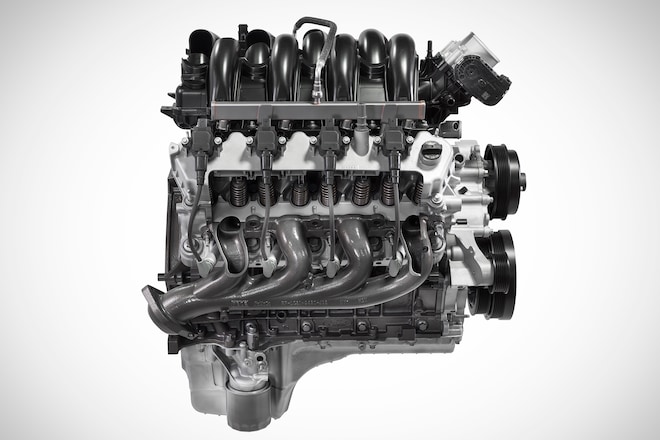 “This engine uses everything that Ford has learned. The same guy who did the 5.0L and the 5.2L Shelby [GT350] intake port developed this engine. It’s brand new with no compromises. It is designed to be very rugged. It’s a cast iron, four-bolt main block with cross bolts, and the pistons and rings are an evolution of the EcoBoost design. There are fewer parts and it’s built in Windsor [Ontario]. The DOHC V8 engines use 32 valves; this has 16, plus one cam vs four.”

As Ramey stated, the 7.3L utilizes an iron block featuring four-bolt main caps with cross bolts in each main, and the block is fully skirted, which adds rigidity. Bore and stroke comes in at 4.22-inches x 3.976-inches, respectively, to produce 445 cubic inches of displacement.

“We wanted to have a relatively good performance potential for the engine, so it has large bores. This is good for cylinder head flow and creates slower piston speed during cruise modes for better efficiency,” said Ramey. “We also designed the engine to be serviced and rebuilt in the future. So, for these reasons the iron block made the most sense. Another benefit is improved thermal efficiency.” Ramey stated the engine was designed with longevity in mind. The block can be bored and honed at least 0.010-inch according to Ramey, but we suspect there’s plenty of meat to go 0.030-inch over (or larger), which would give you 457 cubes. Some insiders say a bore and stroke upgrade could net over 500 cubic inches! The bottom end also uses an integrated oil pump, and there are options for Super Duty and Medium duty oil cooler attached on the side of the block.

Up top, Ford designed a composite intake that mounts flat at the heads. This helps with sealing and assembly. It also has a dry valley, so there’s less chance of an oil leak. And there’s a flow advantage, too. The 7.3L does not currently utilize direct injection, but Ramey says it can be adopted later if necessary.

The heads are aluminum with tall ports that were developed for good flow and charge motion. “We have a wedge-shaped combustion chamber and the spark plug location is optimized at the center of the dish for the ability to have higher compression ratio. That equals better efficiency and performance. We also use piston-cooling jets that flow oil to the backside of the piston. This cools the pistons under high load to prevent detonation. And we control oil pressure with the variable-displacement oil pump. “We can control the oil pressure in the engine to give a target pressure. It’s a variable-displacement oil pump, so basically we can control the pressure depending on driver demand. At idle we don’t need much pressure, at higher speed or load we can increase pressure to protect the engine.” This is yet another feature that should equate to extra performance and high-mileage durability.

You’ll also note the Beehive valve springs are very tall. This was done to accommodate the high valve lift with low spring stress. “With a tall spring you’re not deflecting the coils as much,” said Ramey. “Pretty much all our engine have evolved to that design with lightweight retainers.” Ramey wouldn’t comment about valve sizes at this time. 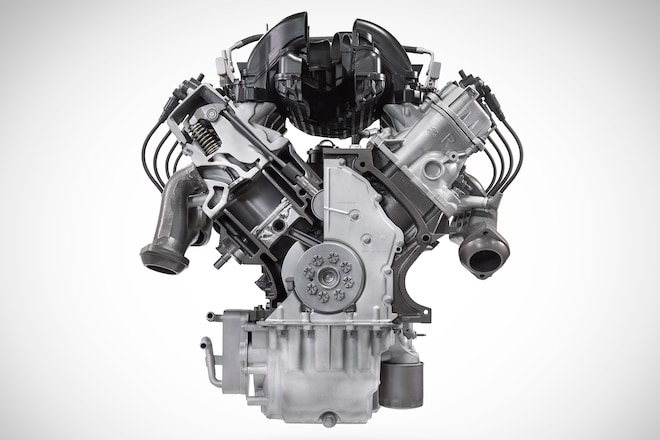 The 7.3L also features forged aluminum rockers with a roller fulcrum, and we can see the valve angle is very shallow, which keeps the valves away from the cylinder wall as they open. This allows for maximum flow. “From a performance aspect, you’re getting a lot there,” he added.

It also uses hydraulic roller lifters with variable valve timing with a single phaser. “It has fixed overlap, but you can advance and retard the cam [on the fly]. This gives us the ability to reduce pumping loss at low engine speed and throttle position, but at higher speeds we can change the phasing for better air flow. The cam features 60mm bearing journals, and speaking of journals, there are 9 of them to reduce or eliminate deflection.

Ramey mentioned the 7.3L is designed to replace the 6.8L V10 that Ford has used since 1997. Depending on the application and year, the 6.8L Triton SOHC EFI V10 produced between 305-362 horsepower (2010 Super Duty was the highest) and as much as 460 lb-ft of torque. While it has displacement and power, it’s large and not the best for engine swaps. Ford stated the new 7.3L will make best-in-class power, so we’re anticipating more than 400 horsepower and 500 lb-ft of torque. 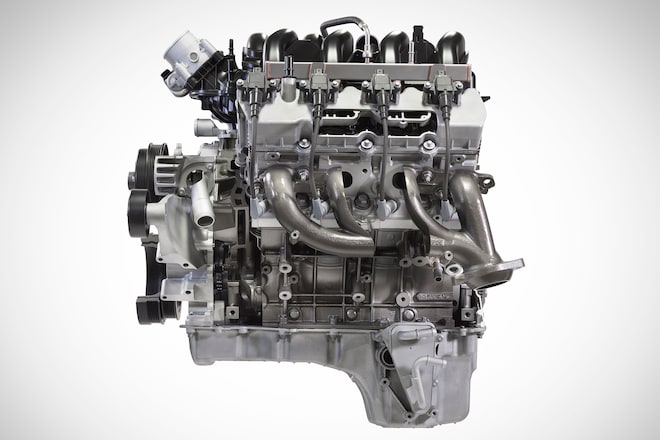 Unlike the 4.6L Two-, Three- and Four-Valve modular and DOHC 5.0 Coyote engines, this is a big incher in a relatively small package. We don’t have specs yet, but it appears to be no larger than a typical small-block Ford. And with engine swaps being all the rage, it will only be a matter of time before we see one in a classic Ford, late-model Mustang, a street rod or dare we say, in a GM product.

Of course, there will be obstacles, and one we see is the extra-deep oil pan. Normally, this wouldn’t present an issue, but the integrated oil pump and pick-up may present a challenge if you plan to set the engine in a low car. The off-road market would simply eat this thing up, especially the classic truck crowd.

Ultimately, time will tell if this engine will be a hit with the performance-minded set. We envision many aftermarket parts, but the real hope is that Ford Performance Parts recognizes our desire for horsepower and offers the 7.3L in a drop-in crate engine package. With a performance intake, cam and FPPS popular Control Pack this would make a wicked-good option for any racer or street enthusiast. 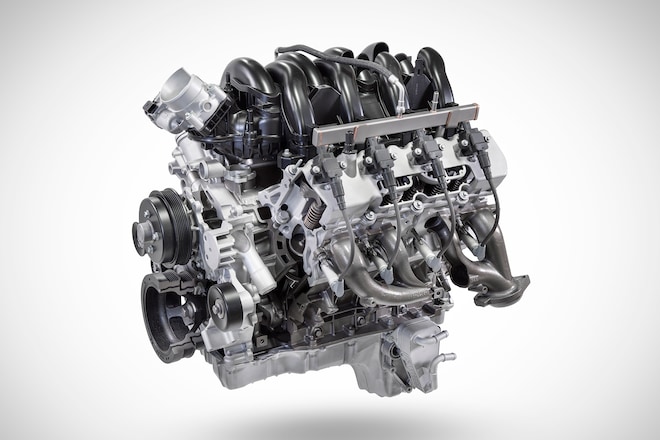 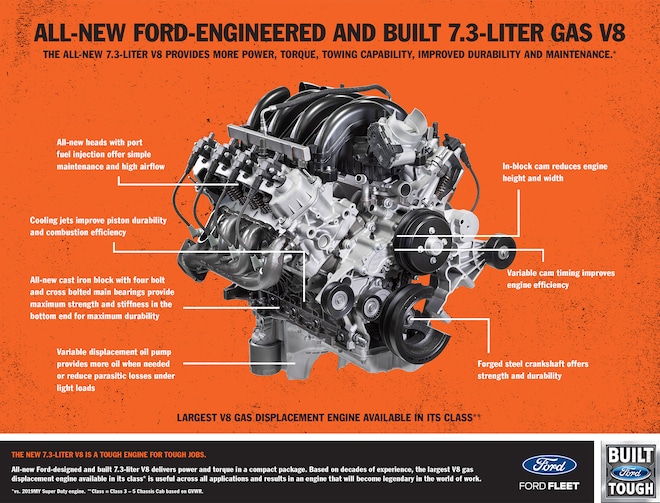